I’ve appreciated the thoughts recently from Mark Headd and Andrew Nicklin on how innovation in civic tech isn’t standing the test of time, nor scaling.

As some of our local projects get to conversations of sustaining, I think it’s one of the most important roles OpenOakland has played- taking on the risk. It has meant that many projects die slowly, but others, even our Adopta, are now at a point that our city partners see immense value in them, and want to figure out how to grow them, and with horizontal scale that’s pretty amazing.

In Oakland, our Adoptdrain app isnt that sexy, but it’s really ramped up the impact of the program run by Environmental Services. 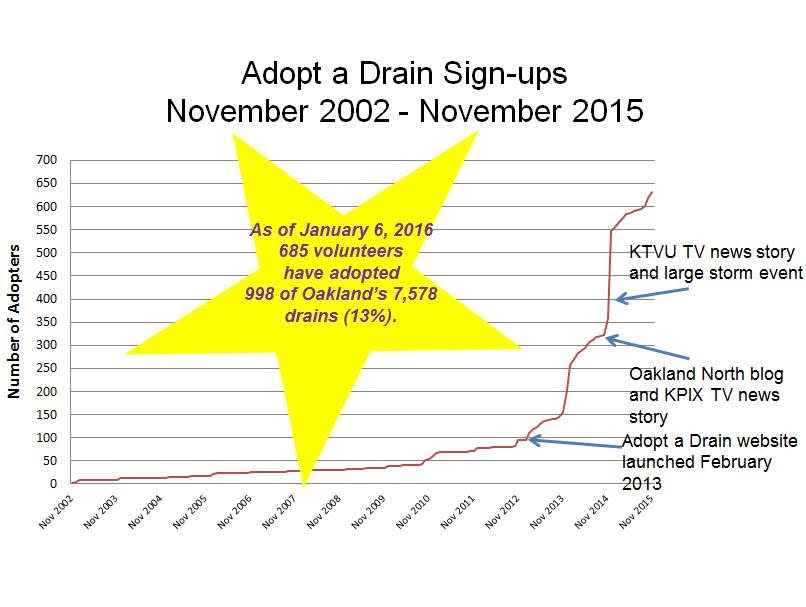 The city staff are building a coalition of several other cities who have forked our code and stood up their own local adopta-drain apps, and they jointly want to support the growth of this tool, all with their own modest change to local instances. This is pretty awesome, simple apps that improve operations of government services and help people step in to do civic work that helps their city’s bottom line. But where we have an opportunity to scale, and government staff willing to consider new risks, we have a model problem.

Orgs like ours (openoakland.org) are great at innovating, trying new things, taking on the risk of possible failure, but we’re not built for sustaining. It’s one thing to get a volunteer team to build an app, or redeploy one, but to do long term code base updates, support requests, deal with multiple clients and feature demands? No, not a good fit. Maybe if we built out a collective of techs for hire, but then we’d be something else altogether.

Reflecting on 3+ years running a civic tech org, Eddie Tejeda and I almost, almost started an open source civic services firm (maybe akin to Andrew Hoppin’s shop, but likely not as good) because we saw that government needed support in adopting (ha) open source tech. But we decided to build OpenOakland as a community, an advocacy and innovation organization instead. Now we’re at a place where our partners need an open source services firm to help them grow. Not just more volunteers. Progress? Yep.

When I look at what came out of our work building Answers.oaklandnet.com I get a similar pattern- I’d wanted to see what we could achieve through this tech/process for a year before we pulled it off, but now it’s still the most useful city web element that people rely on frequently, and it’s inspired some of the city’s approach to the new digital front door project and how the city considers partnering with community. Maybe the app itself is in need of some love, but what this effort sparked was much greater. Again, not a sustainable system built by hackers in one weekend, but a new idea of how to do things better, in collaboration with community.

I’m pretty proud of these outcomes, even if we’ve not gotten our open-by-default government yet. But I see much more to be done. Join us!

This site uses Akismet to reduce spam. Learn how your comment data is processed.