A week ago the famous Napa region was shaken by a 6.0 scale earthquake resulting in serious damage to buildings, injuries and disruptions in services to a large area. This is something residents in the Bay Area have come to expect and we are all waiting for the next “big one”, overdue in most experts opinion.

The same week, our team launched a new app in response to the disaster.

Oakland is a city with a severe housing shortage, building anger towards gentrification and the unmeasured but very real displacement of low income residents who have called this city home for decades.  It is also home to 1,378 large apartment buildings that are at varying risks of collapse in a quake centered closer to Oakland. The City of Oakland and the Association of Bay Area Governments (ABAG) have studied this issue and over half these buildings have been screened – but over 550 remain to be screened for risk.  Many homes have been found to be safe, while 609 buildings (home to thousands of residents in apartments) have been found to be as serious risk – called potential Soft Story buildings – they have a large open ground level such as storage or garages that will potentially collapse in a quake- rendering those homes uninhabitable – an instant loss of thousands of affordable housing units protected under rent control – any housing units built to replace them will surely not be affordable, resulting in very rapid push out of poorer residents.

So why do we civic hackers care about this? It’s a matter of equity and a matter of many residents without good access to information relevant to their living situation- without information, no-one can act. Unfortunately, the common practice in government is to collect information and store it neatly in a report that floats around city hall as a PDF. The data live on a server somewhere, called on only when needed. We greatly respect the proactive work the City and ABAG have done in the screening efforts, however there remains a large number of homes unscreened and there are still thousands of renters with no idea of their risk- either through damage and injury or through displacement after the quake- as a result of rent increases applied by landlords passing on retrofitting costs – Oakland’s rent control policy sadly does not clarify whether seismic retrofitting costs are borne by the landlord or tenant or both.

Some months ago we convinced ABAG and the City of Oakland to publish the data from these surveys – a complicated inventory because of the changing status of buildings as they are screened and retrofitted.  We had been planning to build a new app that would raise awareness of this issue to spur action – both for tenant rights groups and for the city to determine a policy for handling these costs and for ensuring homes in Oakland are safe for residents. After the quake we realised it was an important moment to raise this issue – so we sprinted to release a new app that helps renters and homeowners see the status of their building: http://softstory.openoakland.org.

Our approach is to build tools that puts information in the hands of the public in a way they can act on it. In this case, the formal report is a good document, but it serves policy makers only, it does not inform nor empower those living in these homes.  This simple app lets any resident see how their building is rated – as exempt and not a soft story building, as retrofitted and safe or as potentially soft-story and at risk in a big quake.

We’ve advocated for open data with local governments for this very reason (and others) – data can be used to fill up reports with snippets and summaries that help decision makers, but there should be a default to open with all data that has no legal reason to be protected – this information, in the hands of those actually affected by it can do radically more than if it were still sitting on a government hard drive somewhere in city hall!

Oakland has almost 610 homes at risk of collapse or serious damage in the next earthquake we will experience! These homes, called “soft-story” buildings are multi-unit, wood-frame, residential buildings with a first story that lacks adequate strength or stiffness to prevent leaning or collapse in an earthquake. These buildings pose a safety risk to tenants and occupants, a financial risk to owners and risk to the recovery of the City and region.

Today we are launching a new OpenOakland web and mobile app that will help inform and prepare Oakland renters and homeowners living in these buildings at risk of earthquake damage. The new app: SoftStory.OpenOakland.org provides Oaklanders with a fast, easy way to see if their home has been evaluated as a potential Soft Story building and is at increased risk in an earthquake.

609: multi-unit buildings assessed to be at risk in Oakland

238: buildings have been assessed and found to have been retrofitted or to be exempt.

531: buildings are soft story types but have not had complete screenings yet. 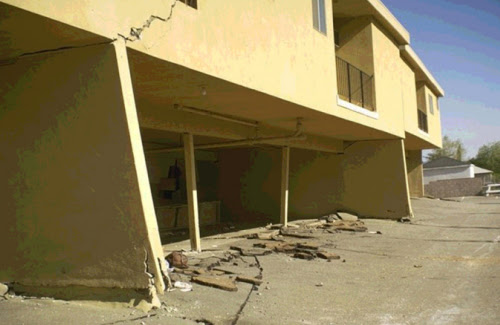 This new app relies on data from a screening of potential soft story buildings undertaken by the City of Oakland and data analyzed by the Association of Bay Area Governments (ABAG). Owners and renters can see if their home is is considered at risk or has already been retrofitted, and learn about the risks to soft-story buildings in a serious earthquake, an event that is once again on people’s minds after last week’s magnitude 6.0 earthquake in Napa. 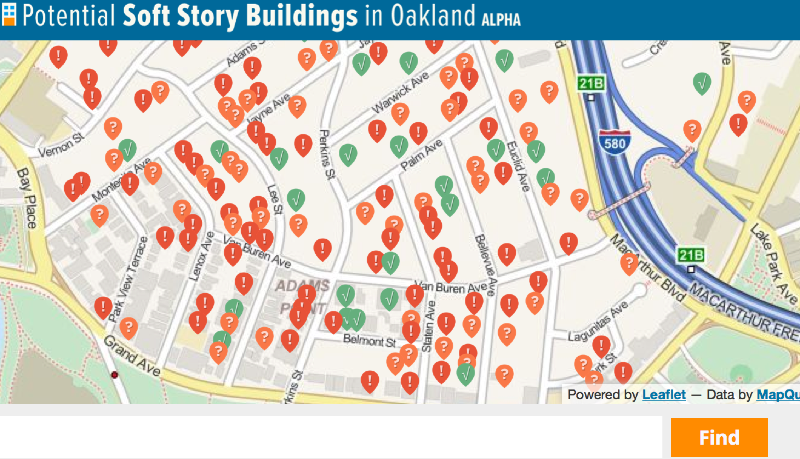 We’re launching this app as a prototype with short notice as we believe this information is critical for Oaklanders at this time.  The app was built with the support of ABAG and the City of Oakland and had technical support provided by Code for America.  Once again, where local government is increasingly transparent, where data is open and in open formats, our community can build new tools to help inform and empower residents.

To see if your building is at risk visit:SoftStory.OpenOakland.org